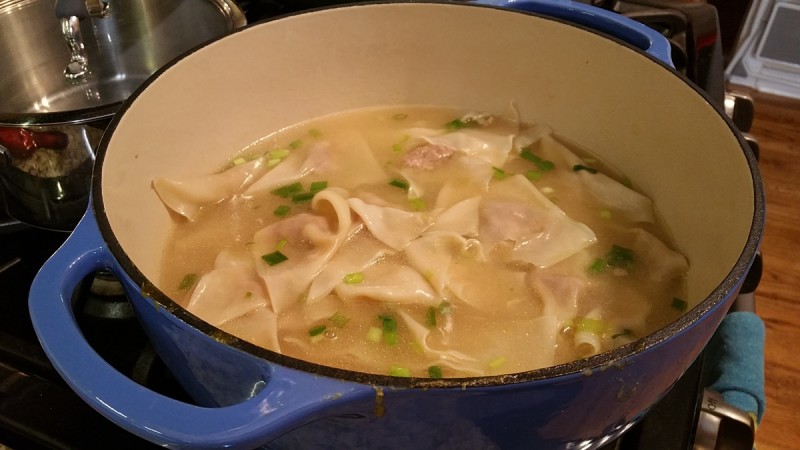 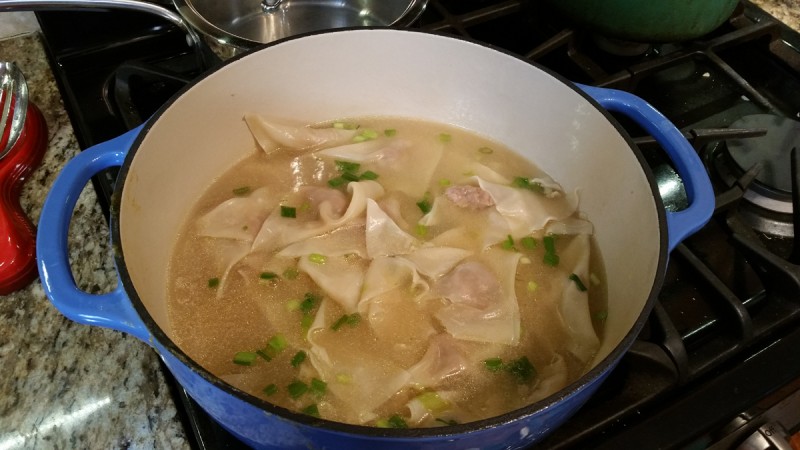 We are huge fans of won ton soup and have purchased too many containers of it from take out, so I wanted to learn how to make it myself.  I have been making this a few years now.  It fills your home with a wonderful aroma of simmering broth, sesame oil (a must!), and authentic Chinese flavors.  This recipe is from About.com’s Chinese cooking section, by Rhonda Parkinson.

**I usually double this recipe because it goes so quickly.**

Combine all the filling ingredients in a bowl, mixing well. Lay one won ton skin in front of you. Cover the remaining won ton skins with a damp towel to keep them from drying out.
Filling the won tons: Moisten all the edges of the won ton wrapper with water. Place a heaping teaspoon of won ton filling in the center. (My tip:  Don’t overfill wonton or it’ll burst).  If these directions are too confusing, look at the graphic on the won ton package on how to fill and seal.
Fold the won ton wrapper in half lengthwise, making sure the ends meet. Press down firmly on the ends to seal.

Use thumbs to push down on the edges of the filling to center it. Keeping thumbs in place, fold over the won ton wrapper one more time. Push the corners up and hold in place between your thumb and index finger. Wet the corners with your fingers. Bring the two ends together so that they overlap. Press to seal. The finished product should resemble a nurse’s cap. Repeat with remaining won tons.

Alternate method: Place the teaspoon of filling in the middle of the wrapper and twist to seal. The final result should resemble a money bag or drawstring purse.

Boiling the won tons: Bring a large pot of water to a boil. Add the won tons, making sure there is enough room for them to move about freely. Let the won tons boil for 5 – 8 minutes, until they rise to the top and the filling is cooked through. Remove from the pot with a slotted spoon.

My tip:  To save effort I’ve boiled the won tons in the actual chicken stock, but to each his/her own.